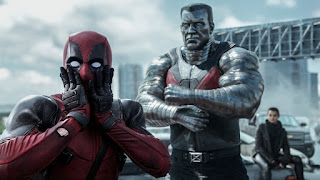 I know you all have been biting your nails, waiting to see when I would finally get around to writing the second part of this review.* Well, here it is, folks. Some deeper thoughts about a couple of aspects of the very popular Deadpool. For the overview I wrote shortly after I saw the movie, go here. Long story short, I found the movie disappointing, in that it really fell short of doing anything original. With no further ado...

It's been so long since I wrote the first half that I'm not even sure what I was talking about when I said something that happened with Vanessa surprised me. It certainly isn't her overall arch. She starts out as a prostitute (or does she? Some have speculated that everything in that first dialogue between her and DP is a lie, and therefore she isn't really a sex worker at all. That would be too bad, as it does make her more interesting, imo). But by the time DP comes back from the experiment that turns him into a mutant, she's become a waitress. Because on some level, everyone agrees (everyone being the filmmakers and their target audience, ie, not me) that being a sex worker is fine as long as you aren't in a committed relationship. Even though Vanessa thinks DP is dead, we have to believe she's still being faithful to him. Had she been one of the strippers in the bar where she works as a server, I would have been far more impressed. But even that's not the same as hooking. I've seen places where much is made of Vanessa as "sex positive" and "not ashamed to be a sex worker" and in fact the narrative doesn't support the latter at all. Sex positive, sure. But you take sex positive and apply it to most female leads and you're not going to get very far in terms of feminist statements. Does she like sex? Sure. It's great that she seems assertive about what she wants, too. But she's still just a "hot chick," as the opening titles define her, whose main role is to be the hero's prize and the damsel in distress.

Another reason it's too bad DP doesn't enjoy the pegging (and, in the minds of Hollywood filmmakers, can't be shown to enjoy it) is because everyone thinks (see above definition of "everyone") that if a guy enjoys any kind of anal stimulation, he must be gay. And we can't have a gay main character in an action movie, now can we? This is all the more disappointing because from what I've read, the DP comic book character is supposed to be pansexual. Not just bi! Pan. Of course, to the comic book writers, this means he'll try anything with anyone or anything. I'm fairly new to the idea of pansexuality, but I do like the concept, and might even go so far as to identify that way. But I do see some folks (even some who consider themselves pan) defining it as an "I'll fuck anything" approach to sex, and that's a problem. Biphobia has a long history of equating bisexuality to promiscuity and inability to be monogamous (and not in a good way). And of course in more virulently homophobic circles, you've got the homosexual sex = pedophilia idea. As if being attracted to men and women makes a person unable to commit, inherently dishonest, fickle, oversexed, dangerous, and predatory. Looks like this pansexual = will fuck anything concept is the same, only multiplied by ten. However, I've also seen it defined, instead, as meaning one isn't restricted in their attractions to one or even two genders. Meaning as a pansexual, someone like DP would go for men, women, transfolk, and gender queer and gender fluid people. But not children, mkay? Or animals. Or other potential hook ups that are upsetting for many good reasons. It would have been nice to see that pansexuality portrayed in Deadpool--nice? Hell, it would have been revolutionary. But the most we get are jokes about how DP has a crush on Wolverine, a masturbation scene involving a plush unicorn, and a cartoon at the end where he rubs a unicorn's horn until a rainbow shoots out.

As an aside, I did appreciate the historical value of that cartoon. I don't think a lot of people know that the unicorn's horn was conceived as a phallic symbol. That's why unicorns go for virgins, folks, and vice versa.

My point is that I do get why the filmmakers shied away from really showing any kind of pansexuality, bisexuality, or homosexuality in the film, but it's disappointing. I wonder if they aren't totally underestimating their audience. From what I've read, Ryan Reynolds, the actor who portrayed DP, and who is supposedly one of the driving forces behind the making of Deadpool, has stated that he's like to see DP have a relationship with a male character. If he's comfortable with it, maybe the fans would be, too? God, I can't wait for the day when showing a M/M relationship with main characters in a fun Hollywood action movie isn't too much to ask.

And both characters get to survive the movie, too. That would be something.

Okay, so I said I'd address another small moment (really, several small moments) that surprised me, and that was with Colossus. He's the CGI character, all metal and brawn, with a Russian accent and a hair cut (can you can a tin head of molded hair a haircut?) that strongly evokes Dolph Lundgren in Rocky IV. But while Lundgren embodies a kind of unnaturally extreme masculinity driven to destroy the natural masculinity of Rocky, Colossus is, instead, a voice of reason/heroicism. So that in itself shows we've come a long way since Rocky IV. Note that I realize this is probably not news to the comic book readers. I don't read the comics, though, so this is my only experience with Colossus. Anyway, there's the way he is that's kind of interesting and different, and then there's the puking. If I understand correctly, one of Colossus's attributes is that he vomits at the sight of blood. Now there's an incongruous quality in a guy who physically embodies the hypermasculine. So kudos for choosing a character that has that kind of inherent contradiction going on. I do think that's worth noting, even if it's certainly not central to the plot. There are these moments, these attempts to turn expectations on their heads.

We also see a lot of male nudity, and often not in a flattering way, too. That's unusual, especially when an effort is made to avoid showing female nudity. It's almost always the other way around. So I have to acknowledge that, too. It's just a shame you can have a film with these cool little nuggets, but they don't add up to anything in the end. In the end the plot is mediocre and there really isn't anything revolutionary about any of it.

What did you think of Deadpool? Did you find it revolutionary?
What do you think of the way it addressed DP's pansexuality? Did you find Vanessa to have more value as a feminist heroine than I did? What are your thoughts on Colossus?

____________________
*In case sarcasm isn't your thing, I am actually grounded in reality and realize that this review's second part is way too late for anyone to really care about it. I just like knowing I finished what I started.
Posted by Sophia at 1:42 PM