I did a little bit of writing today: maybe 20 minutes worth. And a little is better than nothing. I'd like to get into doing it more regularly and doing more of it, though, because this story hasn't gained the momentum it needs to start moving along without a lot of extra pushing on my part.

I find there's different stages, or maybe just modes, as stages implies a chronological order, to writing stories. The mode I'm in is the trying-to-overcome-inertia mode that NaNoWriMo is so wonderful for curing. The next mode, and the one I seem to spend the most time in usually, is the this-is-work-but-I-know-where-I'm-going mode. Then there's the story-is-writing-itself mode: that's the best one, the one I wish I lived in. It's rare and elusive, but usually by the last week of NaNo I reach it.

How about you, do you find your writing has different modes? Any tricks for how to get from one to the next?
Posted by Sophia at 5:47 PM 5 comments:

I did plan to write today...

I promised myself, when I woke up this morning, that I would write for at least a half an hour today. I hoped that it was a low estimate. However, the baby is having a bad day (he's in his crib, not sleeping, right now--it's only a matter of time before I have to pick him up again, I think). We've both had colds and I switched him to soy-based formula in the hopes that it would alleviate his sinuses (when I drink cow's milk it always makes me stuffier), and I don't think it's agreeing with him. I'm especially frustrated because 1) the doctor told me to switch to soy weeks ago because of the baby's eczema, but I didn't because we couldn't afford new formula at the time, and the eczema got better on its own 2) due to a snafu with Amazon I ended up ordering a large quantity of the soy formula and now he seems to dislike it and possibly be having a hard time digesting it, and maybe even getting a bit of a rash from it 3) this all comes at a point where my own milk supply is really dwindling and I've been having to "pump-and-dump" anyway because I'm taking cold medicine so that I can actually sleep the few hours I get here and there... ugh. I feel guilty about not breastfeeding him and now I'm going to have all of this soy formula, and it looks like I have to order more of the other kind. I'd consider returning it, except we're almost completely out, and I can at least mix the soy formula with the regular while we wait for another shipment of the regular... and I have to order all this stuff online because everything at the local store here in lovely Mount Shasta is ridiculously overpriced. Basically I'd pay more than double if I bought the formula there. 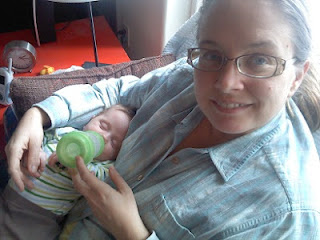 Sorry. Didn't mean to go on a tirade about baby formula there. Looks like he's dropping off, at last. Of course, in about 45 minutes I have to pack him up in the car to go pick up his dad from work. I hope he doesn't freak out, poor thing. He's having a rough day.

So maybe I'll grab these 45 minutes to do some writing. I haven't been making much headway, but that has more to do with the cold, the bad sleep patterns, and all the other mommy stuff than with a problem with the story. Jeff and I just started watching the first episode of Boardwalk Empire, which is awesome as it's set in the 1920s, like my story. I love it when a tv show or movie fuels my inspiration, just by its setting, like that, or sometimes there's an actor I've envisioned for a character, and it can be inspiring to watch them, too.

Do you have shows or movies you watch to get your writing juices flowing?
Posted by Sophia at 2:35 PM 4 comments: 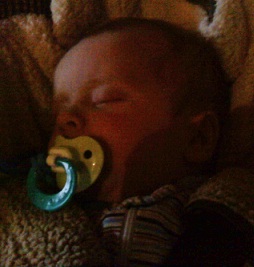 Sleep deprivation is seriously cutting into my ability to write. I know, it sounds lame. It's just sleep, right? But as my husband pointed out, sleep dep can be used as a form of torture. Yesterday was a bad day! The baby didn't go down until 5am and I hadn't had a nap at all so I was a mess. Today is better--got a three and a half hour nap in the evening and then the baby went down at 2am and slept through until 6:30 when I had to take Jeff in to work.

So I actually feel functional enough to do some writing, which I'm off to do as soon as I'm done with this post. Nathan Bradsford recently wrote a blog post about returning to writing after a long break and he recommended, among other tips, writing anything to get the juices flowing, like a blog post. So here I am. Plus, I like feeling like I'm talking with you guys again--I missed it. It's no fun being isolated from the world. Don't get me wrong, I have a tendency to be a hermit. But I do like to feel connected to people who are interested in the same things I am.

Anyway, I started my decopunk story about a week ago. I wrote about 2700 words, I think, and now I'm going to get back into it. If I can just convince this baby to let me sleep at least five hours every 24 hours (doesn't have to be all at once!) I might even get to where I can maintain some sort of routine again.

What about you? Do you have issues with sleep and writing? How do you handle them?
Posted by Sophia at 8:50 AM 2 comments: