There Comes a Prophet, by David Litwack 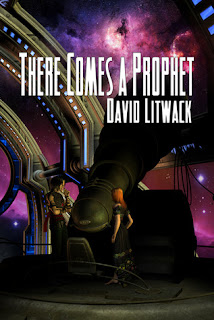 I have mixed feelings about this novel. On the one hand, I enjoyed the writing stylistically. This novel was published by a small publisher, though, so one can expect it to be edited and free from errors. There were some errors, however, though not enough to bother me, and I can be picky. On the other hand, much about it was disappointing.

Plot Summary: A thousand years ago the Temple of Light took over, banning everything that would remind people of the time before (our time, plus perhaps some more advances in technology). The people live as they did in the olden days (I purposefully use a vague term here; the descriptions were lacking) with people who work as weavers and shoemakers. In order to enforce their power and the rejection of what they call the Darkness, the Temple periodically takes a youth and gives them a "teaching;" which amounts to psychological torture lasting several weeks. When the youth's spirit is broken, they return them to their village to be an example to the rest. Which actually sounds a lot harsher and scarier put like that that it actually was in the novel, but I'm getting ahead of myself. Anyway, the three main characters, Orah, Thomas, and Nathaniel, are all around the age of teaching, and Thomas gets chosen. When he returns he's in bad shape, so when Orah gets chosen next, Nathaniel decides to go after her.


The problem I have with the novel is that it was lackluster. There's only one part that really held my attention, and that was in the first third when Orah is taken and Nathaniel goes to save her. That was compelling. Otherwise, this novel really illustrates the need for authors to put their characters in dire situations that seem impossible to escape. Most of the time in this novel, that was not the case. Thomas's teaching, while certainly a sucky experience, was hard for me to really imagine as soul-crushing. They have him in a solitary cell. It's dark. Occasionally they show him images of  nuclear weapons going off, so he learns what the Darkness was all about. Yes, this is a nasty experience, especially for a nice kid who's been raised in a small village where the worst thing that happened was probably a bad winter. But not having experienced solitary confinement myself, I have little understanding of what it does to your mind. Perhaps if the author had gone further in his descriptions... I don't know. You're repeated reassured that no physical harm will come to the character. You know that the period of teaching will end and he'll get to go home. It's just not dire enough.

Even when the characters went to find the Keep, and it looked like the clever arch bishop might be tracking them, they handily get rid of the tracker. No tension there anymore. They find the Keep and spend a leisurely summer looking up things like mathematics. Not exactly nail-biting stuff. Litwack hinted that Thomas might betray his friends, and in the end he sort of does, but only by denying he wanted to go to the Keep with them. I thought he was going to do something far more drastic, like call the vicars. Then it would have been fascinating to see him struggle with what he'd done and all that. So things just never reach any sort of a real peak. It seemed to me that the novel was a platform for the author's views, which many novels are. That doesn't have to be a bad thing, but that's kind of *all* this novel was, in my experience.

As for the characters, they were not developed enough. Each of the main characters only had two or three qualities that defined them, and most of the time the author just told you what they were without going into detail. Nathaniel's a dreamer. He used to dream about knights. He's brave. Orah's the planner. She's also a leader. Thomas used to be the sweet musician, then after his teaching he's the scared sweet musician. He likes food and is good at climbing. Any secondary characters get next to no detail at all. To be fully developed and interesting, characters need a lot more going on. I was really interested when the author started to describe Orah's life as a weaver. I wish there had been a lot more of that. It might have made me care about her more. But more than that, none of them seemed to have real dreams. Nathaniel wants to... explore the mountain pass? That's his big dream? Be a knight, I guess. Although that's implied more than shown. Orah wants...? Nathaniel, eventually, I guess. But not much else. Why does she even care about the Keep? Is it because she got chosen for a teaching and wants to bring the Temple down out of... revenge?

No--such an emotion is too dark and extreme for the characters in this book. They are just nice kids who stumble onto a puzzle and walk a really long time, then get exposed to some education that opens their minds to possibilities. It's not enough to warrant the revolution they decide to bring on. It just isn't. Nobody ever went to war because they thought the populace needed to know that a thousand years ago people were capable of star travel. People become revolutionaries when their children are starving to death.*

So as much as I'd like to rate this novel higher because I appreciate stylistically good writing, I just can't. I hope in his future writing David Litwack raises the stakes and pushes the limits of how far he'll take his characters. It doesn't have to be as brutal as The Hunger Games, but make me believe they're really in danger! :)

__________
*Or when the British overtax them and restrict their "right" to take land from Native Americans. But that was sort of an anomaly, as revolutions go.
Posted by Sophia at 8:38 AM No comments: 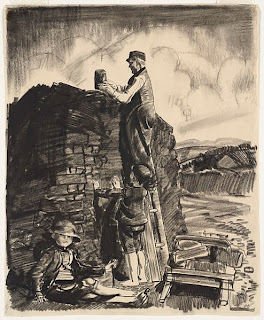 I confess, I'm letting my attention wander off my WiPs at the moment. It shouldn't come as a surprise given that I wrote a whole post about my current writing ennui, of course. But what has been fun is that instead of wasting all my time on The Sims (did you know that The Sims 4 is coming out in a few months? This could be bad news for my writing!), I actually have gotten involved in some world-building. I've had several flickers of inspiration for a possible new series, though I won't say more than that because it's not even half-formed in my mind yet. The world I'm working on will include Odalnord, the land of Myadar and The City Darkens, but it will also possibly be the setting for this new story. I'm toying with a medieval setting and I've been using some pretty fun online utilities to create a land in this world that adheres to some realistic aspects of a medieval European setting. It's still very much in the preliminary stages, but I spent a couple of hours last night working on a map and figuring out where the climate zones would be.

The utilities I have been using are intended for role-playing games a la Dungeons & Dragons, but of course can be used for fictional worlds in novels, too:

This link provides a list of Mapping software, some free, some not. I used "Fractal Mapper" to create my map.

This one is a "domesday book"-- doomsday books (that's the spelling I'm more familiar with) were essentially censuses (censi?) of medieval communities, and historians get very excited about them nowadays. This site allows you to set a couple of parameters and it then gives you calculations for how many cities, towns, etc., and how many professions in a town or village as you choose, would exist in your kingdom. 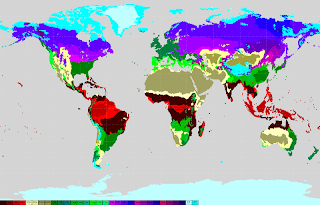 I also just looked at a climate map of Earth and followed the latitudes and other patterns (Oceanic climates on west coasts, for instance) to work with my fantasy world map. I'm probably not going to get it 100% right but it's fun to have a guide. It opens up story possibilities just knowing what the climates are, and, paired with the domesday book site, it makes a difference as to which areas are more densely populated and have cities and such.

Another aspect of the domesday book site that's fun to think about is the history of the land and how long people have been building castles there. That impacts how many castle ruins there are, and castle ruins just provoke all sorts of interesting ideas in terms of adventures that could happen there. What terrible hauntings could be taking place in some castle ruins near the town my character might live in??? Mwahahaha.

Anyway, it's not techinically writing, but it's not so far afield that I feel like I'm abandoning writing completely. And as long as that's where my energy is flowing, I'm going to go with it.

Do you enjoy world-building? How much detail do you like to put into it? Do you have any cool utilities that you use? Recommend them in the comments, I'd love to check them out!
Posted by Sophia at 10:10 AM No comments: