Cover for Myadar's Revelry (part 2 of The City Darkens)

So just to have all my new covers in one place, I figure I'll post a blog article for each.

This one is for part two of The City Darkens, which I'm hoping to publish tomorrow, depending on whether I get the final edits done and whether my homework for the MA program gets in the way. In any case, it should be up by the end of the day Monday.

My concept for the covers is to keep the background mostly the same (although I'm smudging and shading each individually, and unless I find a way to cut that corner, that means each will still have a slightly different background). The portrait of Myadar, the main character, in the foreground, will change with each episode, and have something to do with the story in that episode. In Myadar's Revelry, for instance, it's the first time Myadar's look gets "updated" to reflect the court's fashion (basically flapper, art deco, etc.).

So here it is: 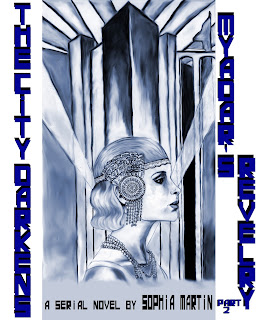 What do you think of it? 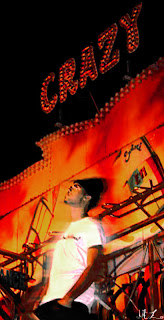 I'm pretty disappointed in Smashwords. They asked me to unpublish Myadar's Snare because they don't allow serial novels. Which makes no sense at all. I don't see the difference between allowing someone to publish a series of novels and a serialized novel, other than the length of the works. But Smashwords says they don't consider a part of a serialized novel to be a complete work (even though they publish novellas all the time), and it is therefore against their terms of service. These are the people who also publish porn, (unlike Amazon). But when it comes to serialized novels, no no.

I contacted Amazon to be sure they didn't have a similar policy. After all, I suppose I could be taking crazy pills. They informed me that they have no problem with publishing parts of a serial novel. So there.

I am so annoyed with Smashwords that I've unpublished everything I have with them. I know, it probably is a little, "Imma take my ball and go home!" The thing is, this policy of theirs is bad business. No one stands to lose in the scenario where they allow me to publish my novel's episodes. If people like the first and want to buy the second and third and so on, they get to read these installments faster than they would if they had to wait for me to finish editing the whole thing to publish it all at once. (I do intend to offer that as an option eventually.) Meanwhile, if folks purchase the parts, that means both Smashwords and I would benefit financially.

Ultimately the best thing about Smashwords was that they made it easy for me to generate coupons to give away books, but I've realized I can just upload files in various formats right here, and I don't need them. The majority of my sales happen on Amazon, followed closely by B&N (I read the B&N policy, and while they don't prohibit serial novels, they do prohibit including links in your book, which I find weird as well). It's a pity, though. I liked Smashwords because it felt more like working with an individual's business rather than a monster corporation like Amazon. In this case, though, the logic of the big corps wins over the crazy of the little guy.

I'll be updating this blog to reflect the change soon. Look for a new page with free books to download.

Have you ever come across a baffling business practice that made you want to stop working with that business? How did you handle it?
Posted by Sophia at 9:26 AM No comments:

If you follow me on Twitter you may have noticed that I was really fretting over the creation of my covers for the decopunk serial novel I've been working on, The City Darkens. I wanted a deco feel, and the closer I could get to a tribute to Fritz Lang's Metropolis, the better. Since part one is almost ready to be published (maybe tomorrow!) the time had really come to confront my fears and get to work on the cover. So I collected some images on Pinterest and sat down at my dining room table with all of my boxes of art supplies, none of which I have touched in over a year, and this is the result: 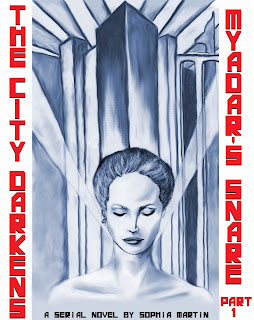 I'm really pleased with it. If you are familiar with the posters for Metropolis, you might recognize the one I like the best: 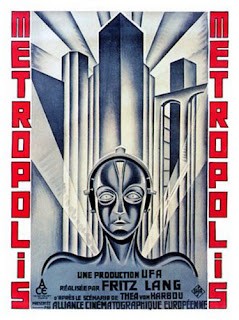 I realize my font is a bit hard to read, but I figure the title will be all typed out nicely at the top of the page next to the cover, so it's really more about catching the eye and also communicating the Lang inspiration and deco quality.

My husband asked whether I'll get in trouble for the similarities. My understanding is that as long as an image is 75% altered from the original, you're okay. Now, I can't claim that I ran any sort of algorithm, but I did change a lot in the picture. I think I'm okay. Would you agree?

Anyway, be on the look out for the soon to be published first episode of my novel, The City Darkens: Myadar's Snare. Yay!
Posted by Sophia at 7:36 PM 2 comments:

The Magicians and Mrs. Quent by Galen Beckett 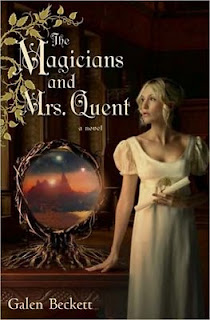 Continuing in my pursuit of good fantasy novels, I picked up The Magicians and Mrs. Quent

, by Galen Beckett. This one is not GLBT, although I suspect two of the male characters may pair off eventually in a sequel.

First off, let me say that the novel was not only good enough for me to finish, but I've wishlisted the sequels. So that's saying something. However, I did have a number of problems with it, which I'll get into in a bit.

The novel is set in an Edwardian-esque fantasy world with strange night/day cycles that change all the time. Nights are referred to as "umbrals" and days as "lumenals," and due to some unexplained phenomenon, some umbrals last 20 hours, some five, and likewise with the days, etc., with no rhyme or reason to when the long and short umbrals and lumenals occur. Magic exists in this world, and seems to have different manifestations based on gender. Other than that, the setting is very much Edwardian, as you can guess from the dress the woman on the cover is wearing.

So my initial reaction to the first lines, which are very  Jane Austen

, was delight. I thought, here is exactly the sort of book I want to read, especially given my intent to explore writing an Edwardian romance. However, this delight soon faded.

First of all, I think it just doesn't fit to combine fantasy and Austen. It's weird, because I love both, but somehow, they just don't go together. It's like lemon curd and white cheddar. Love 'em both. Wouldn't spread the one on the other.

Secondly, Beckett moves from Austen, to Bronte (all of them, but especially Jane Eyre

) to Dickens, and back to Austen. I love all of these, of course, but they are all very different. I don't read Austen if I'm in the mood for gothic romance (Northanger Abbey

is not my favorite of hers), I read Bronte instead. I don't read Bronte if I want a taste of the drudgery of living in working class London, I read Dickens.

HERE THERE BE SPOILERS.

So the movement in the novel from the (mostly) cheery story of Miss Ivy Lockwell and her sisters and their association with Rafferty and Garritt to Ivy becoming a governess in the lonely, shadowy Heathcrest Hall in the windblown, wild country of Mr. Quent (who almost has a wife locked in an upstairs room, for pity's sake), to a return to the capitol with a focus on Garritt's struggle to find and keep a job as a clerk... I just had trouble with it. I found the similarities to real works by Austen, Bronte, and Dickens too distracting and when the plot deviated from the expected formulas for those novels (Austen would not have had Ivy fall for two men, for instance--at least, not without resolving it for the reader so that one of the men was revealed to be a cad) I was annoyed.

I also found it bewildering when the mid section of the book, set at Heathcrest, suddenly switched to first person, and I became convinced that the whole first part of the book was almost entirely unnecessary to the plot. I started thinking, why did the author even include it? And why not write the whole novel in first person? I know why now, having read the whole thing. Beckett needed to go with third person in the first and last thirds of the book to show stories like Garritt's. Could the middle part have remained in third person? Probably. I'm left feeling like the novel just wasn't very tight. Maybe if I reread it I would feel differently.

Anyway, those are my quibbles. Overall, I did enjoy the novel. Ivy is likeable, as is Rafferty. Garritt I'm on the fence about, and I was ready to toss his sister to the bad guy he so strenuously protected her from. I have a theory about Mr. Quent, but I won't share it until I've read the next two books.

I won't say, "If you're a fan of Austen and Bronte you'll like this book," because as you can see, that's not how it worked out for me. Rather, if you are looking for a fantasy novel that departs from the usual medieval setting and involves some likeable characters, you'll like this book.
Posted by Sophia at 9:35 PM 3 comments: