The Conundrum of Ender's Game

Anyone who is interested in sci fi and LGBT issues, and has access to the internet, has probably already heard about the boycott against Ender's Game, the movie based on the novel by Orson Scott Card, opening tonight. A lot of people are very excited for the movie. As I understand it, the novel is very good. My ex-husband certainly liked it a lot. I have never read it, but I do know a little about it from what he told me.

All things being equal, I love sci fi and often wish there were more shows and movies out there to see. So I would have been happy to go see Ender's Game. However, there's a problem. Orson Scott Card is not only a vocal opponent of LGBTQA rights, but he puts his money where his mouth is. So essentially, paying to see Ender's Game means making a contribution to a vehement homophobe's campaign to keep gay marriage illegal and even criminalize homosexuality. Of course, now that his novel is being made into a film and the world has started to discuss his views and actions, Card is claiming he's backing off. He's demanding that everyone show tolerance for his past statements and actions. Which is like Napoleon asking everyone to forget he once took over most of Europe after he was sent to Elba.* 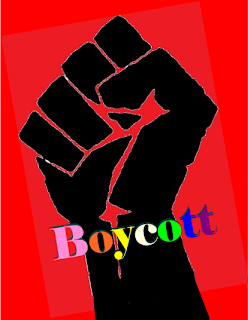 So, okay, Card is a tool and a bigot. Let's all boycott the film.

Except as was recently pointed out to me on  Goodreads forum, Lionsgate, the company producing Ender's Game, has a history of positive policies towards their LGBTQA employees.They've issued a statement, unsurprisingly, in hopes of stopping the boycott before it starts. So paying to see Ender's Game means supporting a company that has publicly declared itself an ally of the LGBT community and apparently puts its money where its mouth is. So the decision is a bit more complicated.

I need to say one or two things about boycotts in general.

First of all, calling for a boycott of a product or service is not the same thing as calling for censorship. I have seen way too many people on the internet in the last few months conflating those two actions. No one who wants to boycott Ender's Game is also automatically saying Card should be silenced, his books should be burned, or anything else that would fall under the purview of censorship. Censorship is about restricting someone's freedom. A boycott is about using one's freedom to choose where one will spend money. In boycotting Ender's Game, people are saying, "Sure, Card, keep doing what you're doing, that's your right. It's also my right to ignore you and refuse to give you money."

Secondly, there's something to be said for participating in a large-scale boycott because it sends a message, even if it seems to be picking on just one person. I've heard before that there's no point in individuals boycotting items without it being part of a larger boycott, because only a large, organized boycott will make a splash. I, for one, boycott Walmart (for so many reasons I will not go into here; watch this movie

if you're curious) despite the fact that my boycott is indefinite and doesn't have to do with a larger organized effort. I will continue to do so even though Walmart probably won't ever notice, because I could not live with myself if I shopped at a place with so many awful policies. There are other businesses and individuals I boycott, but I won't list them all here. The point is, I believe in boycotting, on a personal level and as part of a larger effort. And the larger efforts may actually bear fruit, which is why boycotting Ender's Game may be worth it despite Lionsgate's good policies.

Another thing to consider is the long view: if Ender's Game does well at the box office, Card's chances of scoring more movie deals go up. Do we really want to funnel millions of dollars into this man's pockets?

I am sad I'll miss out on what I'm told will be a really good sci fi movie. But to quote MLK, "Human progress is neither automatic nor inevitable... Every step toward the goal of justice requires sacrifice, suffering, and struggle; the tireless exertions and passionate concern of dedicated individuals." I realize it's just a movie. Seems a little dramatic to quote King. It's just that I so rarely want to see movies that come out these days, and it's such a pleasure to do so. So it is a sacrifice. And a worthy one--I am committed to opposing forces that would deny rights and dignity to people anywhere. So no Ender's Game for me.

Were you planning on seeing Ender's Game? Have you changed your mind? Tell me your take on all of this.

Hello People Who Haven't Quite Given Up on this Blog

Yes, I've been totally MIA blog-wise since June. What can I say, it was a rough summer with little or no writing and fall wasn't much better. There were family issues, there was a move... nothing all that interesting though it effectively brought my blogging and fiction writing to a grinding halt nevertheless. I'm going to reformat The City Darkens today for release as a full novel (no more serialization--I've decided that since no one seemed to think that was as fun as I did, I'm done with it), and I have a new cover (queue excited clapping) done by professional artist Dolly Georgieva-Gode. You get to see it here first: 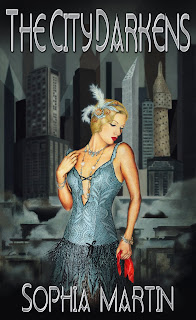 Also, if you read one or more of the installments of The City Darkens, like the first one, Myadar's Snare, for instance, please comment below with your email and I'll send you a complimentary copy of the full novel. I'll be formatting it so you can skip forward to whichever section you choose, so you don't have to reread the first parts if you don't want to. I would, of course, deeply appreciate your giving the book an honest review on Amazon, Barnes & Noble, and Goodreads.

Wondering if you'd like the book and what it's about?

Here's the blurb:
For ten years Myadar has accepted her life as the estranged wife of a nobleman, running his estate and raising their young son. Everything changes when Myadar is summoned to the capital to begin a new life as a courtier in the decadent, scheming royal court. In a land on the cusp of a new age of modernity, Myadar must decide whether to oppose the rising tyranny that threatens to destroy everything she loves, and risk her own life in doing so.

And here are links to the Goodreads pages of the first three installments from back when it was a serial. You can read reviews there.