Having a newborn means lots of reading and not much sleep

Last night I got four hours of sleep, and not all at once. But on the bright side, since my second son's birth I've read something in the neighborhood of fourteen novels--that's since January 18. Considering how little I've been reading until recently, that's quite a change. It all comes from being on maternity leave and having to nurse about every two hours. While I nurse, I read (unless the baby's being especially adorable--then I have to stare at him and stroke his cheek and ears... because they don't stay little like this for long!).

Sometimes I get really nostalgic for when my first son was a baby... it's very different when you only have one child, which I'm sure is not news to any parent of multiple children out there. When I think back to how stressed out I was about having a newborn I wonder what the heck my problem was. When my older son goes to preschool these days I feel like having a baby is cake walk! Nurse him, nap when he naps, change a pooplosion diaper--what's the big deal? And, looking back, I must have got the hang of it eventually, because it was when my first was about four or five months old that I really started blogging a lot, and even started my recipe blog in addition to this one. I was writing, too! 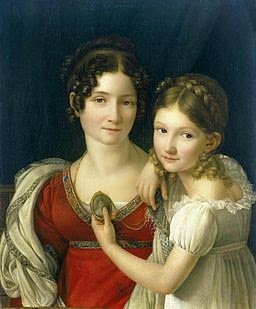 I've had some ideas knocking around for writing, and I've also been thinking I might find a moment here and there (when the three year old is at preschool and the baby is napping, if I've had more than four hours of sleep the night before--it does happen sometimes) to finish writing Veronica 4 and editing The City Smolders. The thing about the ideas for a new story is that the one that seems to be shaping up the most is for a Regency-era romance. If you are at all familiar with my novels you'll know that this is very far afield of what I normally do. Basically, I love Jane Austen's novels and that love extends to a lesser degree to other novels of the period and somewhat after, and I often think I need to write the novels I wish I could find to read. That, and I have a hang up about romance as a genre, and yet I do still love Austen's stories. And I don't understand what my deal is with that. My hang up is that I tend to be pretty cynical about romance in real life, and I also get bored of the heterosexuality of most romances. But, somehow Austen's stories don't push those buttons for me at all. So if I do end up writing a Regency-era romance, it's going to be in part because I'm trying to figure out why those romances don't push my buttons. What is it about Austen's world that I find so compelling? And am I even capable of capturing it?
Posted by Sophia at 1:05 PM 2 comments: