As Nanowrimo passes me by this year, and my prescription for my SSRI has run out without refills because I don't have a doctor locally yet, I am struggling with inertia, frustration, and feeling a little lost.

Kauai is not an easy place to live, despite being a wonderful place to have an amazing time. I have had more fun in the months since we moved here--more unadulterated joyous fun--than I had in the last ten years, easily. I love the ocean, I love waves, and I (newly) love boogie boarding. It's heaven, in that respect. 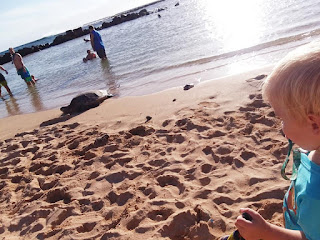 Yesterday there was a sea turtle sunbathing on the beach. It's the third one we've seen doing that since August. I mean, flipping AMAZING.

It's the most beautiful place I've ever lived. And I've lived in some beautiful places, and I even feel disloyal to those places saying it, but let's be real. There are flowers everywhere. In the bushes, in the grass, on the trees, in people's hair, everywhere. Rainbows are almost a daily occurrence. I'm not even exaggerating, I think it might actually be daily. I love the wild chickens, trailing chicks behind them peeping, and the flamboyant roosters everywhere. Geckos--some bright green--on the walls. People don't dress as tacky. I mean, I'm not the fashion police (like, at all). But give me Hawaiian prints over hot pink zebra stripes any day.

But everything you heard about it being expensive is true. It's oddly not the way I expected, somehow, though I didn't have a clear idea anyway. But Jeff and I are both working full time, and we borrowed several thousand dollars from family to move, and now I'm really stressing because we barely make ends meet and we have to pay these people back. I cannot live with not paying them back in a timely manner, I just can't deal with it. They were so generous to help us and we're eating ramen and quesadillas most nights and we are overdrawn in one bank account. It's overwhelming.

Getting a new driver's license is going to be a mountain to climb because I'd let my CA one expire so now I have to go through the whole process--road test, learner's permit, the works.

I have yet to get all my paperwork in to the Hawaii DOE for my job and I'm afraid that when I do they'll dock my salary because of sticky details that shouldn't make a difference but probably will.

My job has these wonderful aspects and these super annoying and stressful aspects that I won't go into detail about. All I'll say is that I'm very grateful to be working with the co-teacher I'm with. He's awesome.

And Jeff is seriously considering applying for PhD programs so it's likely we'll move at the end of this year. Which, considering all the things that make living here hard, is probably going to be the best thing in the long run. But it's more uncertainty and another hella expensive and challenging move... my three year old regressed on potty training with the Kauai move--will he be in diapers in Kindergarten if we move again?

Anyway... are you doing Nano this year?
What uncertainties are you staring down these days?
Posted by Sophia at 6:58 PM 1 comment: