Myadar, long estranged from her husband, Reister, has come to the capitol at his command for the new monarch's coronation. When she arrives she causes a stir with her outdated red dress. After the coronation, she attends a celebratory ball, and finds that the courtiers she encounters will not so easily allow her to forget that she is an outsider and that she committed a faux pas.
~~~~~~~~~~~~~~~~~~~~~~~~~~~~~~ 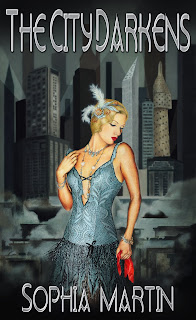 “Ah, Reister Sölbói’s mysterious wife,” said perhaps the fiftieth male courtier we met. They all said some variation of the same thing. It seemed my absence had been noted for some time, which must have made my arrival that much more noticeable. The courtier, who was probably my junior, wore the same black suit with tails as all the rest, a crisp white shirt with a high collar, and a wide cravat made of rose silk embossed with parallel lines that bent together in a step pyramid pattern.

“Myadar, may I introduce Jarl Taf Spraki,” Reister said with a toothy smile. He gestured to the man standing beside Jarl Spraki—he was young as well, perhaps twenty, and his hair escaped the discipline of the slicked style all the men wore in a few rebellious curls. “This is Jarl Liut Krigr.”

“A pleasure, Jarldis Sölbói,” Jarl Krigr said, taking my hand and bowing over it in a brisk movement.

“You changed your dress,” Jarl Spraki said, his mouth twisting into a smirk. I looked down and locked my eyes on his cravat, unable to think of a response. “A pity. I so enjoyed the red one.”

“Please forgive my companion,” Jarl Krigr said, stepping forward. It forced Jarl Spraki to readjust his stance and move behind Krigr a bit. I felt oddly grateful to Krigr for this. “He has forgotten his manners. And why should a dress cause such silly talk? I thought the embroidery was quite lovely, myself. And surely one cannot expect the provinces to follow the fashions of the capitol. As if you had nothing better to do.”

A smile broke over my face although I didn’t intend for it to. I closed my lips but still gazed at Krigr with warmth. He met my eyes—his own were dark amber. There was something strange about the pupils; they weren’t quite the right shape.

“Undoubtedly so,” Reister agreed, standing stiffly at my side. Spraki’s wasn’t the first rude comment I’d endured, and until now Reister had laughed along with those who made them. I wondered if Krigr had managed to shame him for it. I doubted it.

“Liut, darling, do introduce me to your new friend.”

The speaker was a woman, perhaps two or three years older than the jarls. Her thick blonde hair flowed messily around her face, some shorter strands curling, but mostly in waves. She wore a cream-colored dress trimmed in silky fringe across the neckline, and four long strands of pearls. With one hand she played with a strand, and the other she draped over Krigr’s shoulder. I wondered if she was his wife.

Jarldis Vaenn gazed at me from under hooded eyelids. Her eyes were the dark blue of a night sky, at odds with her sunlit hair. She smiled slowly, her expression seductive. I was glad, for the first time, that Reister insisted I keep my hand resting on his arm. No woman had ever looked at me like that, and it had been ten years since any man had. Her eyes spoke of devouring me. My heart raced and I looked away, unable to cover my confusion.

“Reister, dear, no wonder you kept her hidden away,” Jarldis Vaenn said with a golden laugh. “She’s quite delightful. Graceful as a daffodil.”

I looked up at Reister. His face remained neutral, but I could see the slight narrowing of his eyes that told me he did not like Jarldis Vaenn.

“Naturally,” Reister said. “But I always thought she might wilt in the company of one so radiant as yourself, Jarldis Vaenn.”

The City Darkens is available for $3.99 at Amazon and Barnes & Noble.