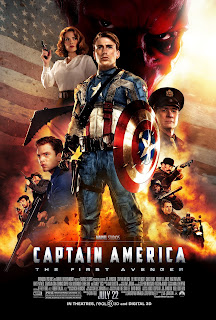 So I recently rented Captain America: The First Avenger from Netflix. I did it knowing next to nothing about the movie and having little idea of what to expect. There are a couple of reasons for this. 1) I generally avoid all descriptions of movies I'm going to watch because they inevitably spoil things. 2) I was not initially the least bit interested in Captain America. It sounded cheesy and overly patriotic. I like superhero movies... sometimes. I didn't think I'd like this one. But then I saw that The Avengers is out, and I'm mostly a Joss Whedon fan (although after what happened to Wash I'm not as sure as I once was). So I watched Thor, which streams, and enjoyed it, particularly because of the Norse mythology since that's a core aspect of my WiP. And I thought, okay, if I'm going to see The Avengers, I'd better get up to speed on all the individual superheroes (The Incredible Hulk is next on the Netflix queue).

So Captain America arrived the day before yesterday and the hubby and I started watching it. Due to the nature of parenting a 7-month-old, we watch anything over 30 minutes in parts. Very quickly, however, I realized something fundamental about the movie that came as a surprise: it was set in the 40s. During World War II.

I know this was probably obvious to anyone who paid even the slightest attention to the movie when it came out; I had not. So I was immediately intrigued. Somehow overly patriotic heroes like Captain America are not nearly as grating in the context of World War II. And then I began to see it: the dieselpunk. Oh my goodness. The lovely, detailed, beautifully designed retro-futuristic dieselpunk.

This was awesome. Not only had I gotten a little boost of inspiration from Thor's Norse pantheon, but now I got to spend the better part of two hours admiring the machines, planes, costumes, sets, etc. of Captain America. Totally unexpected, and a real treat.

My only annoyance: what the heck was up with Red Skull's pin? It's a death's head (okay, that's appropriate for a Nazi) surrounded by tentacles. I'm not the only one seeing a Cthulhu reference here, but nothing comes of it. Empty Cthulhu references annoy me.
Posted by Sophia at 9:38 PM 3 comments:

How to Become a Ghost Writer (Guest Post by Karen Cole)

Meet Karen Cole, a ghost writer and editor I've recently become acquainted with (online). I asked Karen what steps you have to take to become a ghost writer, and she graciously answered by writing this article. 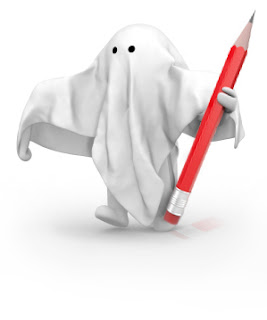 Well, the best advice I can give is to start reading. Read everything you can possibly grab, especially modern work, as this will give you a “feel” for what people are putting out nowadays. Read, read, read, and then start writing. If you are already a writer, write as much as you can that is oriented toward getting published. If you are not yet a writer, write about what you know, and put out several articles on subjects that you know something about. Get these published in places like Ezine Articles on the Internet and in as many other places as you can, in order to build up your writer’s portfolio.

Once you have some published items, sign up for freelancers’ Internet services such as Guru.com where you can start taking on some jobs as a freelance writer. You will want to have at least something of a career as a freelancer started before you begin your work as a ghost writer. It also helps immeasurably to get a degree in English, either in languages or literature, or both; a bachelor’s is probably all that you will need to get started.

Another great way to break in to a writing career is to do book editing and/or copy editing for people. You can find jobs for this listed all over the Internet, and it helps to edit your friends’ books, which of course is often done for free. You can also get work creating or editing copy for people’s websites; look at ads on freelancers’ websites, which are all over the Internet. Get as much paid work as you can, but you might have to start out working for free just to get the experience.

Once you’ve gotten some credentials under your belt, both under your own name and under other people’s names (you’ve contributed, but don’t get the credit), put up your shingle as a ghost writer. Start your own website, possibly listing yourself at first as a freelance writer, and add in your resume and some writing samples from your portfolio. You can also sign up as a ghost writer on several of those aforementioned freelancers’ sites. Be careful of trying to work for bidding sites, though, as the pay for those can be very low and prohibitive. 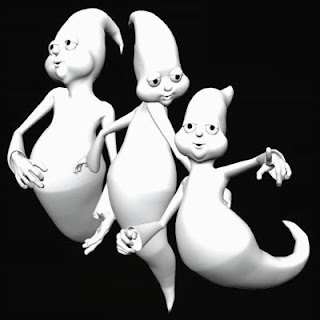 Be sure to search engine optimize your ghost writing or freelance writing website, so that it turns up in search engines such as Google. Maybe you can start up a Google Adwords account, too. Advertise on Facebook with a fan page about your business, and start up a Twitter account or two. Join Writing.com for a classy way to keep your professional writer’s portfolio on the Internet, or you can just use MSN email’s SkyDrive to store your written work – or both! Get the word out about your new ghost writing business. Pretty soon, you will be making some decent money as a professional ghost writer – so get out there, read, write and publish your socks off!
Posted by Sophia at 3:56 PM 2 comments:

The next couple of days are all about MA homework (I'm taking two courses this trimester: the Civil War and the 20th century). I've decided I'll be writing my final research paper--due in August, but the proposal was due last Sunday and I'm turning it in late--for my Civil War class on technology in Sherman's March. Which should actually be pretty interesting. I'm not a big Civil War buff--I tend to be much more interested in 20th century stuff. But so far I really like my professor for the Civil War course, so that helps, and I have been interested in the way technology evolved in the Civil War for some time now. It started with muskets and ended with repeating rifles and to a small extent, Gatling guns, you know. It's like it went from the Mexican-American War to World War I in the span of four years.

I'm less enthused about my 20th century course than I anticipated, though. It's super heavily weighted toward political history, which, on the whole, I find to be a big snooze. And we're barely going to talk about WWII or Vietnam, both of which I really want to learn more about. So I may tack on a couple of courses to my MA. I only have two required courses left after these: constitutional history (ick) and media and cultural history (or something to that effect--interesting, but kind of what I've been into for years, so probably not terribly enlightening--we'll see). I checked out the graduate certificate in WWII studies, and it looks fascinating, but it's 18 units and I don't know if I can really justify that expense. I'd stay a student forever if I could, though.

I haven't been working on the WiP at all these last couple of weeks. My sleep schedule has been messy--the baby started waking up two to three time a night for a while there, and still does every so often, etc. etc. So fatigue is part of it. His erratic nap schedule is also part of it. The excitement over constructing a garden is a part, and so is just plain falling out of the habit. But school is out for summer tomorrow which means after tomorrow, my husband will be around a lot more. That means sleeping in, and maybe being able to get away for a few hours at a time a few times a week to really get some writing done. Fingers crossed.
Posted by Sophia at 9:47 PM 4 comments: