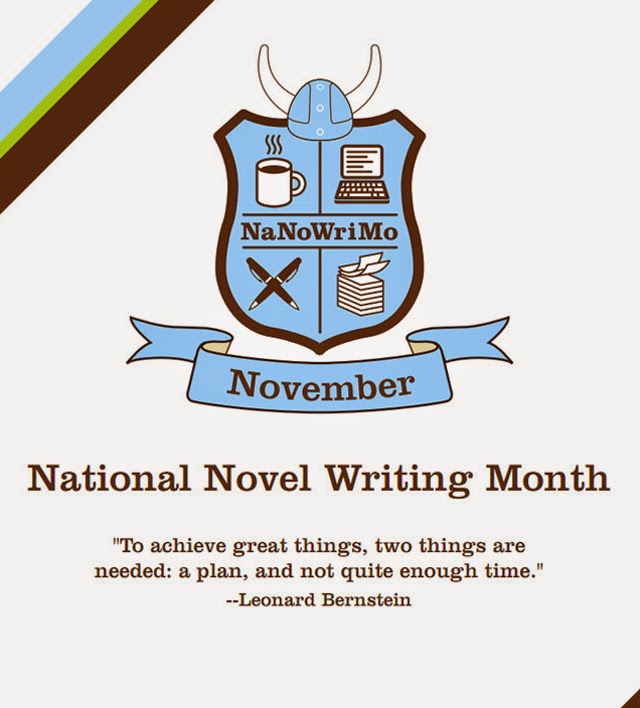 Well, I'm giving it a shot! So far, I have something in the neighborhood of 2200 words written, so I'm on track to achieve my 50K in something like February. But some writing is better than no writing! And I'm hoping my husband will be able to take the three year old to the park or something for longer this weekend, and I can maybe get a bit more caught up.

I deliberated a lot about what to write. I had a dream with this awesome setting. I can really see it working for a Harry Potter-esque young YA fantasy novel in a steampunk/early dieselpunk setting--you know, 1920s again, maybe with more of an art nouveau feel than The City Darkens. The trouble is, it really hasn't had enough time to percolate, so I'm going to put it on hold.

I decided to go with another idea I've been chewing on for the last year or so, which is more of a sort-of cyberpunk, futuristic urban fantasy dystopia story. I still haven't fully decided if I'm going for YA or New Adult in terms of my target audience... the difference is how much sex there'll be in it. I'm being vague about my MC's age for the time being (2200 words in, it's not hard to be vague about that) and I guess when I get to the first scene where sex is an option, I'll see how I feel about it. Oh the joys of NaNo, where you really don't know quite what you're writing until you get to like, the 30K mark.

That said, I did create an outline for this novel, which is unheard of for me. I figure with how little time I have in each sitting, I need a road map or I'm going to get lost. However, yesterday I was looking at it and I'm not sure what I meant by half of what I wrote. So there's that.

I'm a pantser at heart.

How about you? Are you doing NaNoWriMo this year? How well is it going, if so? What kind of story are you writing? Are you a plotter or a pantser?
Posted by Sophia at 8:45 AM 2 comments: