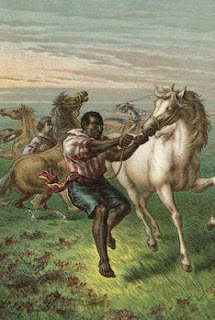 I've begun to write the sequel to The City Darkens, and I won't say very much about that specifically, since it is one my rules never to talk about a story before it's finished. But what I will say is that I decided to go with a different narrator than Myadar. Ginna has lived most of her life in the Undergrunnsby--I felt like Myadar's story really only showed one perspective on the city, and that I needed to have the next story flip that and look at it from a completely different angle. So this has presented two unexpected challenges.

First, Ginna has a distinct voice, which is great, in a distinct dialect, which I can hear clearly in my head most of the time. At first, I had a real struggle because Ginna kept insisting on switching tenses and telling her story sometimes in present tense and sometimes in past tense. Eventually I figured out how to handle this: she'd tell the events of the story in past tense, and anything she considered to be a constant truth she'd tell in present tense. Now the only trouble I'm having is with some of her to-be verbs, which I can't seem to find a consistent way of conjugating. I'm going to have to study up on existing dialects. The nice thing about creating your own fantasy world is that you can take liberties when you invent a dialect. You're not required to represent how real people talk in a certain region of the real world. But you do have to be consistent.

The second unexpected challenge is that Ginna is such a strong personality right from the get-go. I feel like she's just using me to get her story out. (Stephen King attributed an idea to Native Americans--I don't think he was specific about the tribe and I don't remember where I read this--that stories stalk the writer until the writer is ready to tell them, or some such. It's like that.) Actually, a few times it's been like she slapped me upside the head and said, "Hey! What kind of ninny do you think I am? I'm doing this instead." And sometimes I don't really like what she does, but there's no way around it. She's going to do things that way, because that's who she is. For one thing she can be incredibly and remorselessly violent. Not all of the time, but basically she's got a lot of rage from some of the experiences she's been through. I've written before about violence, and how ambivalent I am about representing it in fiction. I look at George R. R. Martin's stories, which granted I've only experienced through the show, Game of Thrones, and I think he goes too far. Don't get me wrong, I'm addicted to the show. But I really could do without some of the images it has put in my head, and it disturbs me when people come to the defense of its violence with reasons like, "It's historically accurate." Westeros doesn't exist, people. It never did. There can be no historical accuracy there. And if you're referring to a depiction of medieval England, let me tell you that the ways in which GoT is historically inaccurate far outweigh the ways in which is may be accurate--for instance, there's no Catholic Church, and you really can't talk about the history of England without including the Catholic Church.

Anyway, the point I was actually trying to get to is that since I've begun dealing with Ginna, it's caused me to wonder if GRRM might actually not have really planned to be quite so brutal when he started writing. Maybe his characters slapped him upside the head and said, "HEY. WE ARE JUST THAT EVIL." Or something. Then again, one of the people I watch GoT with claims that when GRRM was a kid, he had pet turtles, and used to write stories about the turtles torturing each other and plotting to murder each other. So quite possibly he's just that much of a sadist. Who knows?

I'm actually not complaining about Ginna's domination over the story. It's quite wonderful when characters take over and the story grows from them. I'm a pantser, though. I can see how if you had a whole outline written, characters slapping you upside the head and demanding that the story go in a direction you never intended might become a problem. You'd get quite lost without your map.

Have you ever experienced a character running loose from your control? What was that like for you? Did you enjoy it, or were they a royal pain in the ass? How did that story turn out?