We interrupt this regularly scheduled program for: Pre-Eclampsia Survivor Rant 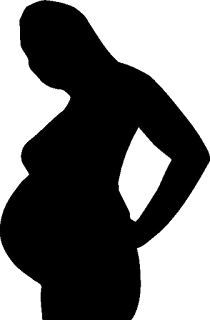 Okay, folks, I'm going to apologize in advance, because this is a rant and it has nothing to do with writing or fiction or anything else this blog is usually about. It's coming at you now because of two experiences I had this week, one on Facebook and one on Twitter.

So, for context, some facts up front:
I am pregnant. This is my fourth pregnancy, but the second one was a loss. In my first pregnancy everything was hunky dory until about week 27 or so when I was diagnosed with pre-eclampsia. In short, that meant I had dangerously high blood pressure (that's not all there is to it, but that's the main thing I was dealing with). Ever watched Downton Abbey? Sybil died because she had eclampsia--what develops from pre-e if it's allowed to. Basically to avoid that you have to have the baby earlier than the due date. My son was induced at 37 weeks (normal pregnancies go to 40 weeks as a rule). Very luckily for me, we both came through without harm. Seizures were a big concern for me for the duration of those weeks, and I was put on bed rest and eventually magnesium--it was not a fun time.

No one knows what causes pre-e. Some of the most recent research suggests that not eating enough protein in early pregnancy may be a factor, but I have no way of saying if that was the case for me. I mean, I ate meat probably most days. But it's true that protein requirements for pregnant women are significantly higher than for the general population. Was I getting enough? I don't know.

Anyway, some things that have not been proven to cause pre-e are: being overweight, having high blood pressure when not pregnant, having blood sugar problems, whether or not you exercise, whether your diet is high in fiber, vegetables and fruit, and whether your diet is low in fat. But today on Twitter, I saw an account devoted to pre-e education that said this: 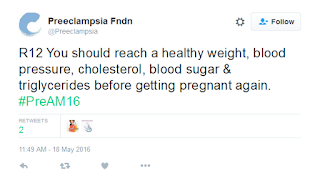 Okay, so I thought, are they talking to someone specific about their issues with their pre-e, or just everybody? So I tweeted them and asked.

To which they replied:

With the following infographic attached: 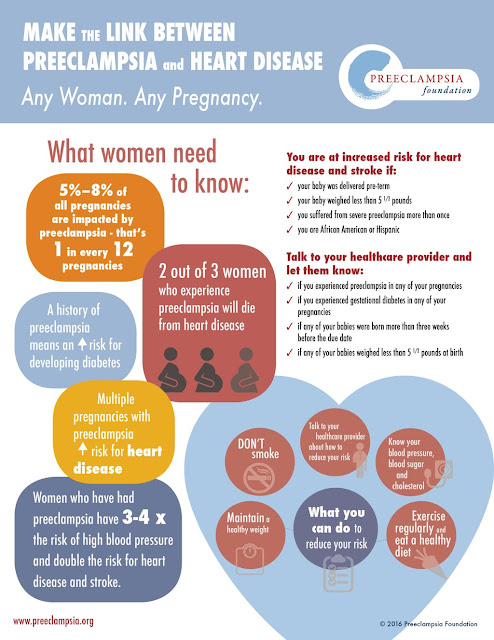 Now, I'm sure this person means well, but honestly, fuck them.

Because the original tweet might have been helpful if they were speaking directly to someone they knew with pre-e who actually had bad blood pressure, blood sugar, cholesterol, etc. Otherwise it's just a shitty thing to say. Why? It implies that people who get pre-e have some kind of control over it.

No amount of dieting and exercise can protect a woman from developing pre-e. Dieting is really controversial these days and it's just plain stupid to go around telling people they need to diet. That's a conversation people have with their doctors. Stay out of it.

In my case I have naturally low BP when not pregnant. I have never had a problem with blood sugar, even while pregnant. My cholesterol is normal. All of it is normal. I am a size 20, though, so clearly I need to go through some sort of weight loss plan to be thin before I should consider having more kids. Because we all know what the outcome rates are for people who do weight loss programs. So what you're actually saying, Twitter twit, is that fat people just shouldn't have babies.

As for the oh-so helpful graphic, thanks a lot for all the stats telling me I'm going to die and develop terrible diseases. That's so helpful and good for my stress. It's not like I don't already worry about this pregnancy's impact on my body, now I have to worry about a pregnancy that happened five years ago, too. Fabulous.

People keep "liking" and retweeting the tweet with the infographic and that, dear readers, is why we are here.

Just in general, please don't tell fat people they need to lose weight. Don't you think most of us would go ahead and shed the pounds if we could? Don't you think we've tried? Actually, many people don't think fat people have tried, they think fat people are lazy asses who never try to do anything healthy. Truthfully, I have stopped trying. I maintain my weight at 220lbs. Why? Because the last time I tried, like, really tried to lose weight, I spent four months drinking two slim fast meals a day and having one actual meal. I also worked out every day for a minimum of an hour and half. I went down to 175lbs after three months and that was it. No more weight loss after that. I tried decreasing my daily intake of calories from 1400 to 1200. I tried adding a half an hour to my daily workouts. Nothing. The scale did not budge. And you know what? I was exhausted and miserable. So I went back to eating like I normally do, which is pretty healthy. I never drink soda or eat fast food. I eat a lot of vegetables, avoid overly processed foods with high fructose corn syrup and hydrogenated fats, etc. I make most of the food I eat from scratch. I exercise some, though not as much as I'd like. I've tracked my eating and basically I eat 500 calories a day more than the recommended amount, so that's why I'm heavy. But when I cut those calories out, we come back to the situation described above. What's the point? I'm not going to give myself headaches and feel wrecked and shitty every day so I can drop maybe twenty pounds and maintain my weight at 200lbs instead of 220. I'm just not enthused by that idea and considering my blood pressure is typically 110/70 and I don't have any signs of blood sugar issues... it's just not something I think about much anymore.

I made the mistake of commenting on an NPR article that was warning pregnant women to wear long sleeves and long pants and bug spray because ZIKA IS COMING TO GET YOU.

And maybe it is, in Florida, I haven't checked the news stories recently. But here's the story I told in my comment on the article:

A couple of months ago my husband, two sons and I went to what is essentially a zoo nearby. When I was there I noticed the most unusual mosquito--it had stripey legs. Of course we all got bitten. When I got home I googled it and found out it's one of the two main types of mosquitoes that carry Zika. Now, I'm in Northern California and when I told my husband this he was like, "Meh, Zika happens in tropical places." But then a day or two later he and my older son both got sick, with flu-like symptoms and bloodshot eyes. Guess what? That sounds like Zika. So I told my OB about it. He was very nice and not at all condescending, but he basically told me I was being paranoid. At that time there had been no cases of people getting Zika in California or Oregon. All cases of Zika were people who had caught it elsewhere and traveled here.

I concluded my story by saying that I thought the NPR article was fear-mongering, and we shouldn't let these sorts of fears get the best of us, or something to that effect. So this guy answered me telling me I shouldn't blow off the risk and good luck with my pregnancy because I had probably been exposed to Zika.

I responded to him saying I don't need luck. I've had several ultrasounds (for completely unrelated reasons) and they've measured the baby's head multiple times and he's growing just fine.

To which several people then replied in so many words that clearly my ultrasounds were flawed and didn't pick up the birth defects and my baby would no doubt have microcephaly. One went so far as to say I would no doubt have to have a late-term abortion at 30 weeks. (As I write this I am 31 weeks.)

It was so important to those people to cling to their fears about Zika and their need to police pregnant women that they told me, a real person who is pregnant, that her baby is going to die at 30 weeks.

By the way, if I did get exposed to Zika and my baby was harmed, you know what can be done about it? Absolutely nothing.

But the thing is, I really don't believe that I was. I know my baby is okay. And I also know it probably wouldn't be good for him if slather myself in pesticides because I'm afraid of catching the Zika virus in an area of the world which, as far as I know, still hasn't had any local cases.

Okay I feel better. Thank you for reading this whole thing, it's a bear. But these are just two examples--people police pregnant woman all the time and it is SO TIRESOME. After several pregnancies, in some ways being preggo does get easier, but in others, NOT SO MUCH. Like when people think they are being helpful when they tell pregnant women how to live their lives.

Have you ever dealt with this sort of "well-meaning" bullshit?
Do you feel entitled to tell pregnant women what to do and not to do to have a healthy pregnancy?
Please, comment and let me know, though be careful if your answer to the second question is yes. I have pregnancy hormones and I know how to use them.