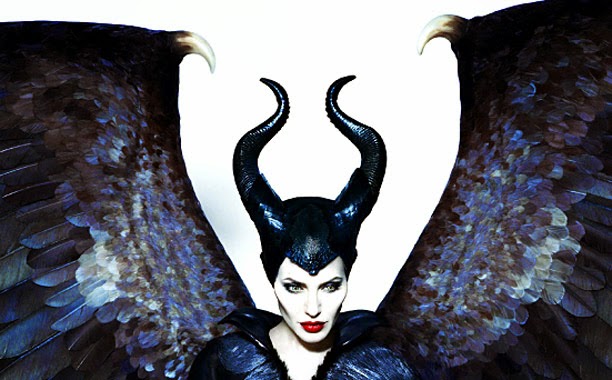 My husband and I went to see Maleficent yesterday and if bigamy was legal and you could marry a movie, I'd marry Maleficent.

Okay, I'm kidding a little. But only a little. The movie isn't perfect. I could have completely done without the narrator, for one. Add a scene or two to provide the exposition, and get rid of the narrator. The only narrator I ever like to listen to is Galadriel, and this was no Galadriel. Also, the three Stooges-esque "comedy" of the three fairies was really weak--but then I've never been a fan of that kind of slapstick comedy. And I get the criticism some reviewers have made regarding the idea that anyone would entrust a baby to those goofs. Plus, this is not the movie where Disney makes any strides towards LGBTTQ inclusiveness. I'm willing to just set all that aside, because what I loved about the movie just so far outweighs all the flaws.

Some reviewers were unhappy with how focused on Angelina Jolie the movie was. This was no problem for me, because I really admire Angelina Jolie. Before she became unnaturally thin, I used to think she was very attractive, as well--I don't think of her that way as much, but I really enjoyed her in this role. She was perfectly cast. She has the unusually extreme features necessary for a non-human character, and all they needed to do was enhance her cheekbones and her eyes a little to make her look fey. Even her thinness worked for the character. And I loved how demon-like she looked, with her horns and the hooks on her wings. And yet she was not a demon. That was awesome.

Beyond her looks, though, I admire Jolie for her adoptions and her choice to go public with her decision to get a double mastectomy. I'm sure she's got plenty of flaws, but when it comes to what I know of her, I think of her as a really strong woman.

Which brings me to what I loved about this movie. This was a movie about a very strong woman. It showed her suffering and rising from that, taking vengeance, and then returning to herself. It's hard to capture in words how watching this movie made me feel. Just watching her fly--I had tears in my eyes. Why? Well, partly because I'm not in my right mind these days. But also because I haven't seen anything like that in so long. It's been so long since a I saw a female character who was strong without being irrationally emotional. Who was beautiful without being oversexed. Who was furious without being obsessed with a man. And the whole movie was like a feminist fantasy* of a woman beating these awful men--and only when they were trying to destroy the forest, too. I mean, for a greenie like me, that was awesome.

Most of the characters in this movie were female. Like I mentioned above, the fairies were too silly, but even so, at least they were female. I get very frustrated with all the stories where maybe the main character is female, which is nice, but then it's like the people writing the story have to balance that with three extra male characters. And then, of course, there's the bazillion stories out there with the one or two female supporting characters, who never talk to each other unless it's about one of the male characters. Even my beloved Lord of the Rings trilogy is terrible in this way. I've come to a point where I watch shows and movies and just try to roll with it. Watching Maleficent shook me up because it reminded me of what I've been missing.

Maleficent does fall in love in the film, but it's never central to who she is or what she's doing. Her love, Stefan, eventually becomes too wrapped up in his ambition to become king to visit her anymore, and all that happens is that Maleficent spends some time alone sometimes. It's implied she misses him, but not really spelled out, and certainly not dwelt on. That was refreshing. Then, the king tells his would-be heirs that he will give the succession to the one who kills Maleficent, and Stefan uses their former relationship to approach her. He drugs her and tries to kill her. He can't go through with it. One reviewer I read claims this is because he's "weak." I disagree. Stefan can't kill Maleficent because some part of him still loves her. Instead, he cuts off her wings.

Here's one of the things I loved about the movie. I knew something bad would have to happen to her to make her go evil and curse a baby, and I was dreading the obvious choice for her motivation there: the woman-scorned storyline we see so often (recently they decided to explain the Wicked Witch of the West

's motivation in this tired way, for instance). But Maleficent doesn't go evil because Stefan scorned her. She goes evil because he stole her wings. It is her wings she mourns--not her love. She describes them, latter, "I had wings once, and they were strong. They could carry me above the clouds and into the headwinds, and they never faltered. Not even once."

Thoughout the scene where she first mourns her wings I cried for her because I thought of how in real life, Jolie has had to give up part of her body. I don't know what it's like to lose your breasts. I know she made a choice to do so--but it must still have been devastating. So, another reason the casting of her in this role resonated powerfully.

Then, there's the resolution of the curse. If you're familiar with the original Disney movie of Sleeping Beauty

, you know that Maleficent curses Aurora as a baby--she will grow in grace and beauty, everyone who knows her will love her,** but then at the age of 16, she will prick her finger on a spinning wheel's needle and fall into a death-like sleep (although in the original story, unless I'm mistaken, the evil fairy curses her to die and one of the good fairies softens the curse to a death-like sleep--in the movie they skipped that). Only true love's kiss will wake her, but then, Maleficent doesn't believe in true love.

Maleficent watches the baby grow and finds she has to intervene because of the three fairies' incompetence. Soon, she is charmed by the little girl, and eventually, comes to love her so much she wants to revoke the curse, but can't. Aurora pricks her finger and falls asleep, but not before meeting a nice-looking, charming prince. Everyone scrambles to get this prince to Aurora's bedside, Maleficent included.

Now, I watch Once Upon a Time, and one of the things I love about that show is that mother's love counts as true love. And if anyone acted as Aurora's mother as she grew up, it was Maleficent, though she was cold and withdrawn about it. So I was really hoping Maleficent's kiss would do the trick, and pretty annoyed that they were going with the love at first sight silliness with the prince. And then... his kiss didn't work. Maleficent's did.

That was exactly what I wanted to see happen.

My husband, who in some ways is more radical that I am when it comes to gender and political stuff, was annoyed when the prince turned up at the end as some kind of reward for Aurora. He thought it would have been better without that. I can see his point, but it didn't bother me. The movie was never about Aurora, though she was important. And I don't begrudge characters having romantic relationships, as long as they aren't the only thing they are living for. I'm married, after all, and very happy to have a companion that I love. I wouldn't want to deny that to all the fictional characters out there, in some effort to make them all strong and independent islands. And Maleficent remains strong and independent, though not an island, because she has her companion and servant, Diaval***.

Anyway, overall, halleluliah for a film that presents a strong woman who never falters in her strength. A woman not ruled by her emotions. A complex woman. I have waited a long time to see that. Not to be over-dramatic about it, but in this current culture of open misogyny and narrow roles for women, it was like a balm to my soul.

_________________________
*It was very much the kind of fantasy I would have had as a young feminist. But I don't want to give the impression that I buy into the "feminists hate men" stereotype. It happens that many women, myself included, come to feminism after having very negative experiences with men, and as a result they do go through a period of fury towards men. It's not a balanced approach, and if this film wanted to be balanced, it failed at doing that. But I honestly don't need balanced fantasies right now. I am fine with a fantasy that privileges women, for once. If this movie plays out a feminist anti-man fantasy, in contrast with the thousands of male-fantasy misogynistic movies that objectify and dehumanize women, I am okay with that.
**This is actually something that bothers me. The implication is that Maleficent comes to love Aurora because of her own curse, not because she is a complex person with sensitivity and the ability to love independently of magical influence. I think it's great that she's so cold about it--she doesn't morph into this maternal, nurturing stereotype of perfect womanly motherhood at any point. Having experienced some of what she sees in Aurora with my own baby, I felt like I knew why she loved Aurora despite herself, and that's all I needed.
***One reviewer complained that Diaval becomes the dragon in the end instead of Maleficent, but I really feel that that reviewer totally missed the point. Maleficent is the one who turns him into a dragon, and he serves her. In the end, Maleficent regains her full power when she becomes fully herself once more. Changing into a dragon would have detracted from that.
Posted by Sophia at 9:48 AM 5 comments: