Deadpool -- I didn't love it, Part 1: The Overview 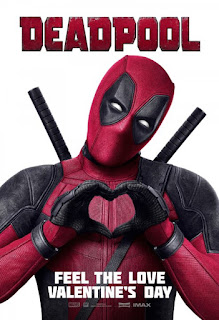 I didn't hate it, either, but after all the hype that seems to be building exponentially on Twitter, I really went into it expecting more. Which, I believe, is part of why I wasn't that impressed. I think if I'd gone into Deadpool without hearing about how hilarious it was and how original and irreverent and surprising and all of that, I might have actually found it funnier, more surprising, and maybe even original. Though ultimately the conclusion I have come to is that Deadpool is unusual but not original.

But before I go further with this review...

HERE THERE BE SPOILERS. LOTS AND LOTS OF SPOILERS.

The first unusual bit comes with the opening, a frozen scene of a car accident which might as well have the word (abbreviation?) "FUBAR" written across it. As the camera winds and pans out, what appear to be credits begin scrolling, except that they are... unusual. Instead of actual names, they are things like, "A Hot Chick," "A British Villain," "A Moody Teen," "A CGI Character"... the producers are listed as "Asshats" and the writers as "the True Heroes Here." So that was cute. Except all the cliches promised are delivered without a twist. I was hoping, I guess, that there would be something interesting and unexpected about the hot chick, the British villain, and the moody teen. But the hot chick, played by Morena Baccarin (I'd watch a much crappier movie to see her) is just a hot chick. Sure, she doesn't take shit from an asshole in a bar, and eventually she does stab a villain (doesn't kill him though), but ultimately all she is, is a hot chick. A damsel to be rescued. More on her later. The British villain is all evil, no complexity, and he succeeds in making the viewer hope Deadpool ignores the advice of the CGI character trying to convince him to be a hero and not shoot the Brit in the face (Deadpool delivers). More on the CGI guy later, too. The moody teen gets defined right away by Deadpool, who says she'll spend the whole movie brooding silently or saying mean things... and she does. Pretty boring, actually. Pretty abysmally boring, to be honest. Why would you put together these elements? I mean, on the one hand you have a movie that's trying to be unusual (at the very least) with a surprising number of crude jokes (it's true that you don't tend to see Spiderman or even Iron Man referencing his masturbation habits the way Deadpool does), but then they just build a story that's nothing short of one big cliche, and they populate it with characters who are also all cliches, except maybe for Blind Al, who, I admit, does stand out: she's an acerbic, elderly, blind, African American woman who is Deadpool's roommate.

Deadpool is an antihero's origin story and not much else. It plays out nonlinearly, which was exciting back when Tarantino was doing it, I guess, though I never thought it was that big of a deal to begin with.

So before I come back to a discussion of the Vanessa character and the Colossus character (both of which relate to the only two times the movie managed to surprise me) let's recap. Deadpool is unusual in that it breaks the fourth wall quite a bit. A lot of the jokes are off-color in a way you don't generally see in a superhero movie. And... well, there's the thing that happens with Colossus, but I think you'll agree once I get to that that it's really not enough to make the movie original. Otherwise you have an origin story which I guess does have another unusual element--the motive for Wade to become Deadpool is that he's dying of cancer. Having a lead make a massive life change due to cancer has been done (Breaking Bad) but not so much with superhero stories (which actually relates to the other thing that surprised me). But besides El Cancer (as Deadpool calls it) the origin story isn't particularly interesting or original--Wade lets an evil private corporation do an experimental procedure on him, becomes their prisoner as they torture him for a while, eventually the procedure takes, and voila, he's a regenerating machine. He's also horribly disfigured but I'm sorry, that's not all that original. Plenty of superheroes go farther in losing their former looks--Swamp Thing, Beast, Hulk (who, granted, gets to change back and look human sometimes), V from V for Vendatta, Marv from Sin City, etc. Deadpool, as an antihero, scars more than most heroes, but that's so unoriginal TV Tropes addresses it. We're meant to like Deadpool because he snarks in the face of torture (don't we just love leads who do that?) but again, so not original.


What's even more disappointing as you peel back the layers is that one of the main things that makes Deadpool unusual is actually built on some old, overused ideas. Namely the crude humor. A lot of it grows out of the same old homophobia and misogyny powering all the "funny" not-gay-but-gay scenes in otherwise really good shows like Friends and Supernatural. And it's really too bad, because sometimes Deadpool seems to be embodying a new kind of masculinity, in which feminine poses and admissions of weakness don't undermine his strength. But then he "kisses" an early male encounter to cement his dominance over him, makes fun of the Brit for having the first name "Francis" (which clearly means the Brit lacks some essential masculinity) and provokes a fight in a bar by buying a guy a "blow job" shot and making it look like another guy sent it to him. Hilarious. What's more, Deadpool is just another man-child. He loves his toys (literally, he collects Voltron figurines) and can't face his illness with any kind of maturity, while Vanessa steps up right away. How many couples have we seen where this is the dynamic? Why aren't people sick of the man-child/woman-mommy relationship?!?

And despite the inclusion of Blind Al, Deadpool manages to be racist. DP gets in a cab driven by a South Asian man who is a wide-eyed innocent. The cabbie is soon so enamored of DP that he doesn't react when DP stiffs him, and in fact will gladly pick him up again later. The cabbie is in love but a rival has stolen his fiancee--DP advises him to kill the rival and kidnap the fiancee (and after a flashback in which he condemned stalking, too), and by the movie's end the rival is struggling in the trunk of the taxi, so it's clear the cabbie will do exactly as DP suggested. The cabbie's sole purpose in the film is to provide comic relief (though I gather he's not who the opening credits call the "Comic Relief"--that's DP's bestie, Weasel). If I were a South Asian man watching the film, I wouldn't be too happy with that guy as a representative of people like me.

Did you see Deadpool? What did you think of it? Did it live up to your expectations or, like me, were you let down?

More on the characters of Vanessa and Colossus in the next post...